in NFT Web3
by CryptoDaily 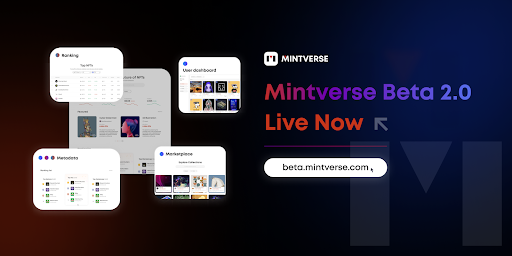 With an increased global interest in NFTs and the different utilities they offer, Mintverse and other NFT marketplaces have to fill in the gaps newcomers to the NFT space have in terms of knowledge. The new tracking system aims to bridge this gap via increased user interaction.

Mintverse has made some critical changes. The first of these is the linking of user wallets and the allowance for exploring the marketplace from one interface. The user dashboard has also seen significant improvements that enable an improved end-user experience. The Mintverse team will make information available on upcoming NFT airdrops from different creators, alongside a new NFT ranking system. The display of recent statistics for all NFT collections and searches contains new filters to allow users to go deep on anything they are looking for.

Introducing the GamesPad allows for the underpinning of gaming project offerings, as they have become popular recently.

Being a dual-chain marketplace, Mintverse allows users to change their perceptions based on experience with its ecosystem.

Since the spike in NFT interest across industries, NFT marketplaces have popped up across the web3 space to cater to the various needs of users. Some focused on the general NFT space, while most focused on niches. IT fueled further interest in NFTs as the world sought to understand this "other" part of the web3 space.

Today, NFT marketplaces fuel the adoption of web3 technologies as NFTs have created fans out of skeptics who had their misgivings about fungible tokens (at first). Mintverse is one of those marketplaces focusing specifically on peer-to-peer trading as the ultimate form of NFT sales. Peer-to-peer marketplaces thrive, especially within the web3 space, as industry technologies are decentralized in nature. Mintverse has taken this to the next level by allowing greater user inclusion and interaction while staying in the decentralized lane.

With significant interest from investors that include Fenbushi Capital, A&T Capital, Mirana Ventures, and others, Mintverse has created solutions to the many problems that plague the NFT space while keeping things simple enough for newbies to onboard successfully.

The problems of lack of asset exposure, high gas fees, lack of inclusion for creators, asset illiquidity, and so on have been solved by Mintverse via several solutions. With access to thriving Decentralized Autonomous Organization (DAO), sofi, gaming project incubation and acceleration, a user-oriented team, and more, Mintverse has considered these issues and has created new ways and means of solving them.

The growth of peer-to-peer marketplaces is on the rise as the web3 space continues to grow based on the one principle that governs projects that ultimately succeed: innovation. Speaking about this, Rene Cao, Founder at Mintverse said.

"Mintverse will serve the BSC ecosystem by providing the largest and most aggregated NFT database. Moving forward, BSC based NFT projects, specifically gaming projects, will not need to develop their own marketplace as Mintverse will automatically aggregate all NFT assets immediately, creating a version of OpenSea for BSC NFTs".

"Besides this, Mintverse has already analysed more assets on ETH in comparison to OpenSea, the largest NFT marketplace in the market. In order to create a real decentralised platform we will be rewarding users on Mintverse with 100% commission rebate, embodying Web 3.0 which we consider to be the future".

As web3 continues to gain adoption, marketplaces like Mintverse give everyone the chance to come into the fold but seamlessly. At least, that's how the expected mass adoption of web3 technologies will occur.